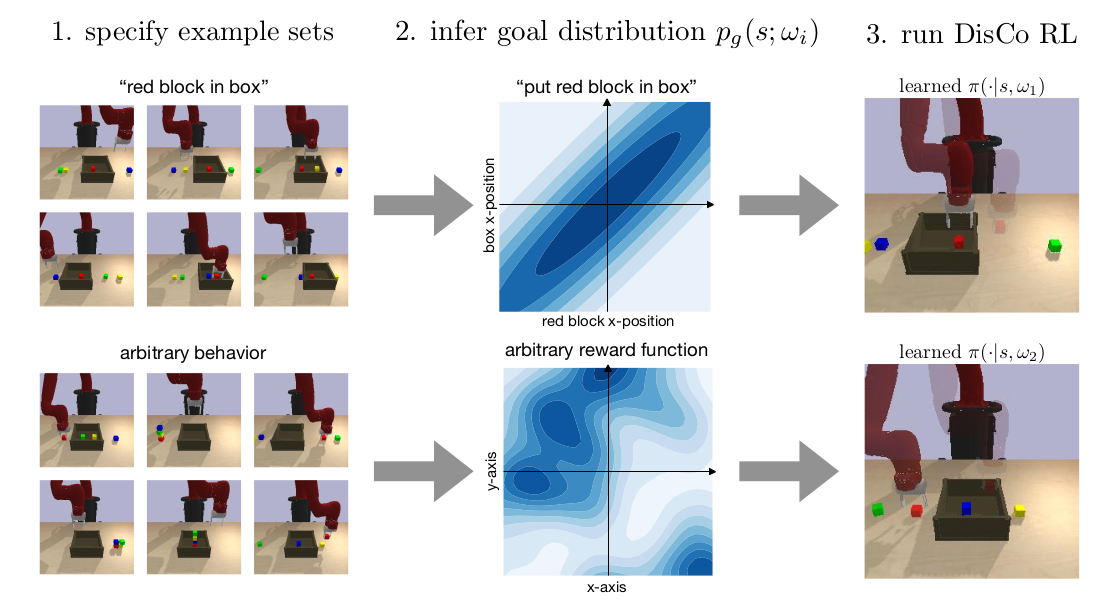 Can we use reinforcement learning to learn general-purpose policies that can perform a wide range of different tasks, resulting in flexible and reusable skills? Contextual policies provide this capability in principle, but the representation of the context determines the degree of generalization and expressivity. Categorical contexts preclude generalization to entirely new tasks. Goal-conditioned policies may enable some generalization, but cannot capture all tasks that might be desired. In this paper, we propose goal distributions as a general and broadly applicable task representation suitable for contextual policies. Goal distributions are general in the sense that they can represent any state-based reward function when equipped with an appropriate distribution class, while the particular choice of distribution class allows us to trade off expressivity and learnability. We develop an off-policy algorithm called distribution-conditioned reinforcement learnin (DisCo) to efficiently learn these policies. We evaluate DisCo on a variety of robot manipulation tasks and find that it significantly outperforms prior methods on tasks that require generalization to new goal distributions.

Many multi-agent navigation approaches make use of simplified representations such as a disk. These simplifications allow for fast simulation of thousands of agents but limit the simulation accuracy and fidelity. In this paper, we propose a fully integrated physical character control and multi-agent navigation method. In place of sample complex online planning methods, we extend the use of recent deep reinforcement learning techniques. This extension improves on multi-agent navigation models and simulated humanoids by combining Multi-Agent and Hierarchical Reinforcement Learning. We train a single short term goal-conditioned low-level policy to provide directed walking behaviour. This task-agnostic controller can be shared by higher-level policies that perform longer-term planning. The proposed approach produces reciprocal collision avoidance, robust navigation, and emergent crowd behaviours. Furthermore, it offers several key affordances not previously possible in multi-agent navigation including tunable character morphology and physically accurate interactions with agents and the environment. Our results show that the proposed method outperforms prior methods across environments and tasks, as well as, performing well in terms of zero-shot generalization over different numbers of agents and computation time. 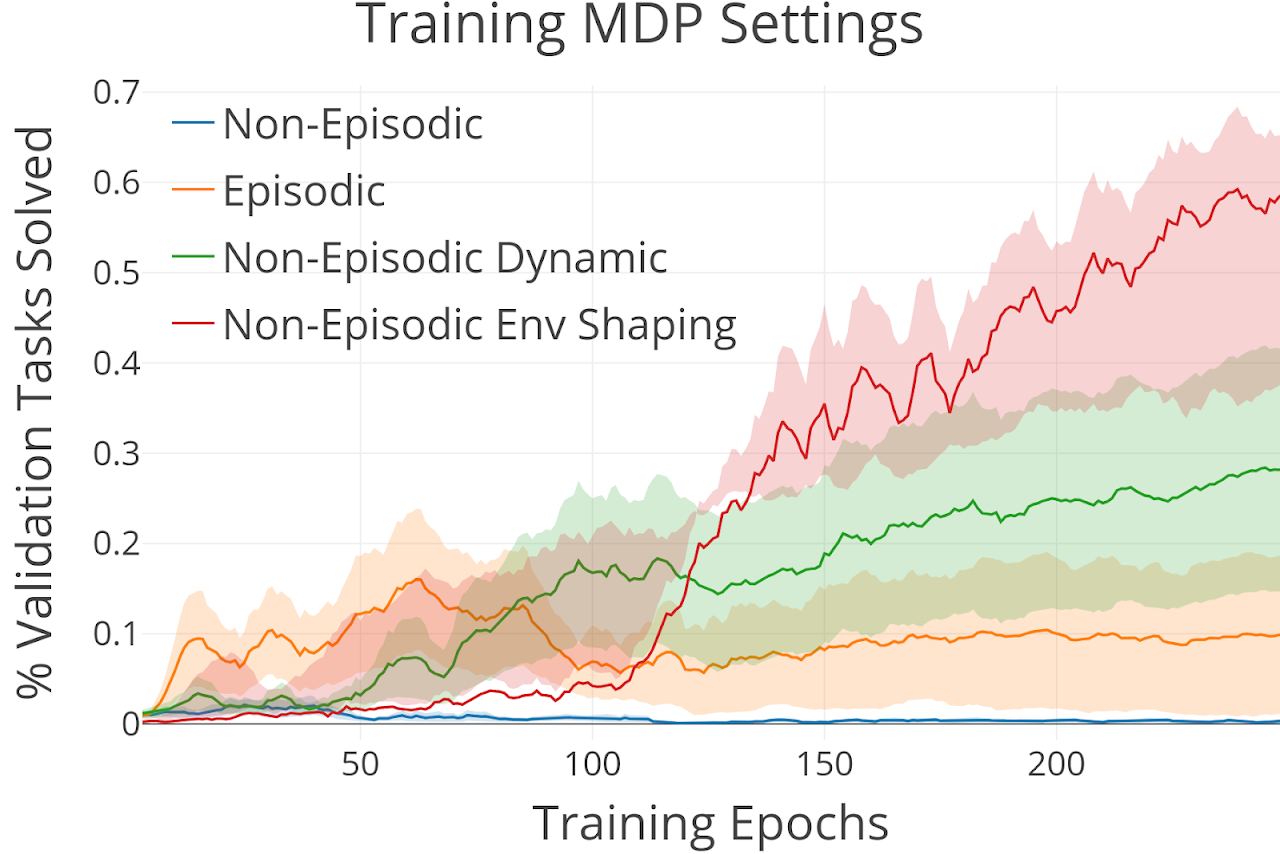 Reinforcement learning is normally studied in the episodic setting where the agent is reset each episode. This makes learning easier but in the real world, we would like our agent to continually learn with minimal human supervision and without having to manually reset the agent each time it makes a mistake. Reset-free or non-episodic learning is difficult, especially with sparse reward where the agent may never experience any rewarding states and not make any progress. Without any algorithmic changes however, certain properties of the environment can make learning without resets and with sparse reward more tractable. We investigate and analyze these properties: environment shaping and environment dynamism.

Hierarchical models for deep reinforcement learning (RL) have emerged as powerful methods for generating meaningful control strategies in difficult long time horizon tasks. Training of said hierarchical models, however, continue to suffer from instabilities that limit their applicability. In this paper, we address instabilities that arise from the concurrent optimization of goal-assignment and goal-achievement policies. Drawing connections between this concurrent optimization scheme and communication and cooperation in multi-agent RL, we redefine the standard optimization procedure to explicitly promote cooperation between these disparate tasks. Our method is demonstrated to achieve superior results to existing techniques in a set of difficult long time horizon tasks, and serves to expand the scope of solvable tasks by hierarchical reinforcement learning.

Existing approaches for visuomotor robotic control typically require characterizing the robot in advance by calibrating the camera or performing system identification. We propose MAVRIC, an approach that works with minimal prior knowledge of the robot's morphology, and requires only a camera view containing the robot and its environment and an unknown control interface. MAVRIC revolves around a mutual information-based method for self-recognition, which discovers visual "control points" on the robot body within a few seconds of exploratory interaction, and these control points in turn are then used for visual servoing. MAVRIC can control robots with imprecise actuation, no proprioceptive feedback, unknown morphologies including novel tools, unknown camera poses, and even unsteady handheld cameras. We demonstrate our method on visually-guided 3D point reaching, trajectory following, and robot-to-robot imitation.